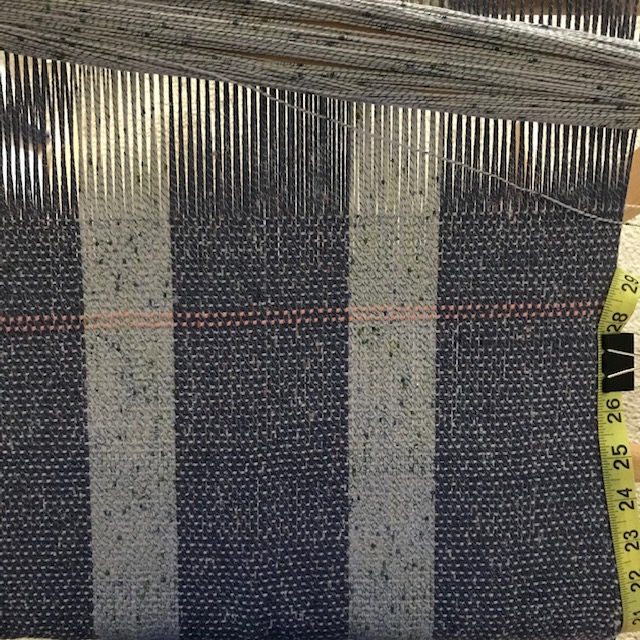 It’s been a few months of frantic creativity – both with writing and a favorite hobby, weaving. In the past few months, I’ve woven 12 regular towels, 2 kitchen towels, 4 hand towels, 2 washcloths, 1 shawl, and 4 scarves, with the 5th on the loom. Oh, and made 24 bars of soap. The towels needed accompaniment. (No, not the Zombie Apocalypse, just holiday presents.)

Why this frantic activity? I finished the outline of the Sequel Fantasy Novel, wrote the first several chapters, and paused, needed to parse out what the outline said next. My usual method is to read the outline, ponder the scenes, then write and refine them in my head. The best way I found to do that is while doing something else. Some people use music or jogging. I use weaving (and knitting). I find the repetition soothing, especially the back and forth of the shuttle between the yarns.

Off the Loom (Brain)

Weaving is kind of mathematical in nature and the orderly arrangement of calculating warp and weft is much like outlining a story. Once warped on the loom, all that’s left is to weave so many inches until it comes to the designated stopping place. The same with the scenes I write in my head. Once the weaving is done, I hemstitch the ends or make fringes and remove the item from the loom. Once done working out the scene, I remove it from my head to paper. Then start all over again.

It’s been a great method for me. Warping the loom involves a lot of walking back and forth from loom to warp peg to loom, sometimes for 220 strands of yarn for each item. (My Fitbit loves this.) It’s all very meditative, including the part where I separate double strands into singles and slot them through the holes in the reed. (Don’t worry, you don’t have to remember all the weaving lingo, there is no test at the end.)

Since my mind is ordinarily moving at warp speed on different things, the meditative rhythm and silence slow it to a gentle hum. When I feel the need to throw rocks at a character, I just look for the mistakes in my work. Because there will be mistakes. Such as warping 200 slots and missing one in the middle. But it’s fixable, just like the writing is fixable if I ponder long enough. What other ways have you come up with to work on your writing while not actually writing?

Fringe = A fringe is an ornamental appendage to the border of an item, twisted or left loose. It is the ends of the warp, projecting beyond the woven fabric.

Hemstitch = The hemstitch is an ornamental thread work technique to finish the ends of the woven item, just like you would hem the edges of clothing.

Reed/Heddle = The comb-like device that holds and separates the warp threads. It has slots and eyes/holes which allow every second warp thread to move up and down and create the shed. It is also used to beat the weft into place.

Weft = the threads woven across the warp threads

Shuttle = yarn is wound onto the shuttle. The shuttle carries the yarn through the weaving

More Posts on Writing and Thinking

A Meditation on Walking and Writing

The Value of Silence in an Uncertain World

This is Your Brain on Writing

Some Links on Weaving

Need some looms? Mine are all Schacht. I have a Flip Loom, a Cricket Loom, and Inkle Loom, and I’m eyeballing a Tapestry Loom.

Things you can weave with a rigid heddle loom (Pinterest)

Everything about rigid heddle looms in one place. Gist Yarn

2 thoughts on “Using Weaving for Bursts of Writing Creativity”