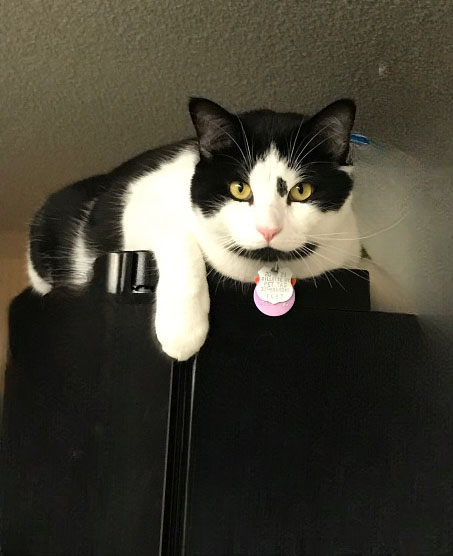 How do cats help you write? By focusing the eyes of judgment upon you. Continuously. Under the heavy scrutiny of a feline, one tends to look at their work with a more critical eye. No? Just me? My Tuxedo cat, Lorenzo, likes to sprawl on the bookcase across the room and watch me as I write. I’m hyper-aware of those yellow eyes observing and judging. Especially when I read a passage aloud.

It’s bad enough to have to listen to my voice attempting to add inflection and create different voices for the characters. I can’t help it, I glance over at the cat as I’m doing it. He stares with eyes narrowed to slits. The tail gives a lazy flick. My words suddenly become weak under the weight of feline perception. I click and highlight puny words, and rearrange sentences. Remake, redo, rewrite.

How Cats Really Help You Write

Lorenzo never jumps in my lap and attempts to comfort me. Or change my prose. He doesn’t walk across my keyboard. Well, he did once when he was new, but never since. Rewriting is not his job. Instead, he skulks above on the bookcase, peering down, forming opinions and conclusions, black and white face a mask of indifference. If that’s not a hypercritical reader, I don’t know what is. Not much awes a cat.

(The Corgis would gasp and gush “I love it!” even if I read them a grocery list.)

Sometimes my spoken words get scant approval. He lazes with a paw hanging over the edge of the bookcase, head turned away, the cat version of impressed. I feel good. “This is a new chapter,” I tell him. “The one where the hero realizes the antagonist is not who he thought it was. Life is about to get worse.”

Lorenzo rolls over, crouches, and leaps the six feet to the floor. A big stretch, then a whack to a toy mouse in his way. He pounces, rolls over, savages it, back feet flailing, claws digging. This goes on for a good five minutes. Finished, he spares a glance for me and utters a cross between a soft yowl and a gurgle. He stalks over to his cat tree, climbs to the tallest bed in the tower, and curls up for a nap, back to me.

Message received. My hero needs to suffer more. The great revelation needs punching up. I pound away at the keyboard in a frenzy, rewriting, tossing my hero off a cliff into a pit full of stinging jellyfish riding the backs of pissed-off alligators. Hours later I read it aloud, gratified when Lorenzo uncurls from his sunny perch to come over, staring up with unblinking yellow eyes. He admits several vocalizations that sound more like guttural wahs than meows. Does it mean I’ve done it? Impressed the judgmental cat?

A Meditation on Walking and Writing

What I Learned From Editing

The Relationship Between Famous Writers & Their Cats

2 thoughts on “How Cats Help You Write”