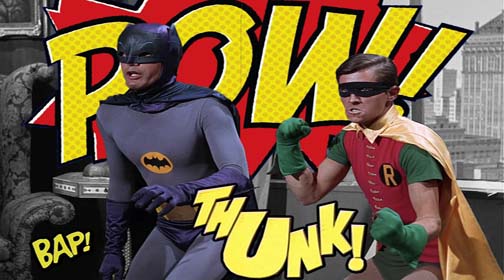 (Thank you, 60’s Batman, for the onomatopoeia.)

Why does the answer to everything seem to be violence?

Books, movies, real life. Blood, gore, guns. Maybe I’m too much a wuss for this. I don’t believe every problem needs to be solved by punching, shooting, blowing up, or some form of superhero power liberally applied.

It’s inescapable. In my first fantasy novel, I gave one of the heroes a sword. He refused to use it again after seeing the aftermath of his warmongering. He gave it away. In my new WIP, one of the protagonists refuses to carry a gun, although almost everyone in his world does. He knows his refusal will not change a damn thing but it aligns with his values.  Which probably align with mine, since every character, at its core, is me or evil me or pissed off me or head in the sand me.

The Folly of Youth

When I was younger and in the Army as an engineer, I took great glee in blowing up things like bridges, tossing hand grenades with abandon, and shooting my rifle at targets, never connecting that if I went to war, I would be required to apply these methods to people.

Then I learned to use words. Words are molasses poured over the violence urge, or gasoline tossed on the pyre. Used judiciously they support and defend. Used viciously, they flay. I do believe they have power over the sword if only to blunt the edge. Unfortunately, people are moving away from the written word, the spoken word, the lovingly crafted word toward a society of shouty words and half-baked memes standing in for a thoughtful conversation.

All you poets and writers keep on doing what you do. Society needs you now, more than ever. Fight the good fight. Maybe it’s your words that will change the world for the better, or at least plant a seed.